Here are a few of our new (to us) old (to gardens) blue and bluish flowers we’re growing: 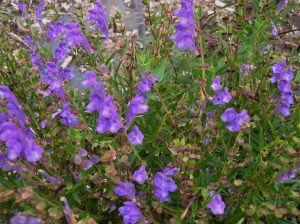 Been working on growing this for a few years to grow enough to sell. Finally it’s landed. One of the best for long blooming spikes on a mid-sized plant – Scutellaria baicalensis   Chinese skullcap, native to Siberia too so you know it’s hardy. Ancient China – it cured colds, fever, headaches and insomnia. In 19th century English gardens it added “rich velvety dark blue flowers.” William Robinson.

Award-winning true steel blue flowers. Yes, it’s a thistle – rabbits and deer stay away. Eryngium amethystinum  Amethyst sea holly, flowers in mid to late summer. In gardens since 1648. Hardy from the arctic (laughs at the polar vortex) to Zone 8.     S – no picture 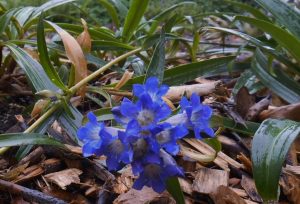 Here’s another true blue that we’ve been working on for a few years to get enough to sell, Gentiana dahurica Siberian Gentian. Flares of its dark blue tubes surround white throats. Blooms in early to mid-summer. In gardens since its discovery in 1812.  Zones 4-7       S – ask me which picture to use 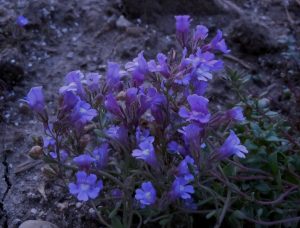