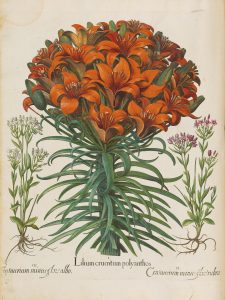 Before the English arrived at Jamestown, before James Smith met Pocahontas, Prince Bishop of Eichstätt created a spectacular garden at his palace in Bavaria with plants from around the western world, many imported by merchants in the Netherlands – started in 1590’s. Eichstätt was one of the oldest dioceses in today’s Germany, then the Holy Roman Empire.

Eichstätt’s was the first major European botanical garden outside Italy. Eight terraces, each terrace planted with flowers blooming in a different season, surrounded the Willibaldsburg palace, built atop a hill. Tulips in 500 different colors bloomed on the spring terrace.

The Bishop sponsored a florilegium of the plants in his garden. Two volumes were published -one, a catalog listing more than a thousand different plants and the second, illustrated flowers – drawn, engraved and colored by hand. Hortus Eystettensis or The Garden at Eichstätt is considered the most magnificent florilegium ever created and now one of the world’s most valuable books. Only 28 colored books are known. You can see this at http://bibdigital.rjb.csic.es/ing/Libro.php?Libro=1617. On the left hand side scroll down past the roman numerals and you’ll find page after page marked “folio.” Each page is a separate colored engraving – spectacular.

The palace survives today. Fighting during the Thirty Years’ War destroyed the gardens but they were recreated in 1998 using the Hortus Eystettensis as a guide.

HAPPY HOLIDAYS – our best to you for feasting on a cold winter’s day or night.