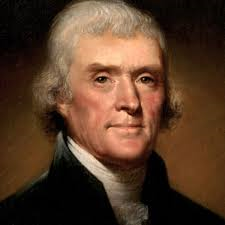 freedom or state’s rights but to me he was the greatest president-gardener. By now you’ve probably guessed – Thomas Jefferson, born 275 years ago this Friday the 13th.

Obsessive, compulsive, perfectionist, curious, persistent all describe Jefferson as some of the reasons I consider him the greatest president-gardener. Fellow students at William and Mary College described him as studying fifteen hours a day with the rest devoted to playing the violin, eating and sleeping. About his favorite interest and activity – gardening, he wrote, “No occupation is so delightful to me as the culture of the earth and no culture comparable to that of the garden.   Such a variety of subjects, someone always coming to perfection, the failure of one thing repaired by the success of another . . . I am still devoted to the garden. But though an old man, I am but a young gardener.” Letter to Charles Willson Peale, August 20, 1811.

He personally designed the magnificent gardens at Monticello, not just the layout but also choosing specific plants. See pictures at https://www.monticello.org/site/house-and-gardens/historic-gardens .  While Minister to France he toured English gardens in the 1780’s when English landscape design reigned – an open lawn surrounded by a serpentine walk with randomly placed clumps of plants. Like George Washington he admired William Hamilton’s “Woodlands,” designed along this principle. Monticello’s flower gardens take up this design with creative differences. Rather than clumps of trees along the winding path Jefferson randomly placed flower beds adjacent to the path. He added twenty oval-shaped flower beds independent of the path.

He hosted legendary dinners with several courses and up to eight different wines prepared by his French chef and served by waiters in livery. (Lest you consider him a snob, visitors described him as looking like a farmer while padding around the President’s house in the daytime.) He just loved food and wine and the company of interesting people. With these passions he constructed an awe-inspiring vegetable garden, terracing one side of his mountain to make a level vegetable garden. Jefferson and neighbors competed for growing the best vegetables in summers. He also grew a vineyard and fruit trees.

Jefferson kept up correspondence with other gardeners and with botanists. While in France he befriended André Thouin, head gardener at Le Jardin du Roi, and Mme de Tesse. For years they corresponded and traded seeds. He kept in regular contact with Benjamin Smith Barton, botany professor at University of Pennsylvania and Bernhard McMahon author and plant nursery owner. He collected books, the largest library in the US at the time. As a botanical autodidact hundreds of his books were about plants and gardening.

Jefferson repeatedly tried to find someone to journey overland to the Pacific coast. After twenty years he found Meriwether Lewis to prosecute the expedition. Jefferson trained, sent for training and assigned Lewis the job of plant collecting. During the grueling twenty eight month expedition Lewis harvested and pressed a couple hundred plant specimens, most new to science.

Jefferson obsessively kept a garden journal including botanic names of plants – when planted or sowed, when they emerged in spring, when they flowered or were ready to eat, “came to table.” Thomas Jefferson’s Garden Book, Edwin Morris Betts ed. Philadelphia 1943. Because of this we have a record of what he grew. Here’s a short list of some flowers that Jefferson grew at Monticello. You can, and maybe do, grow them too. 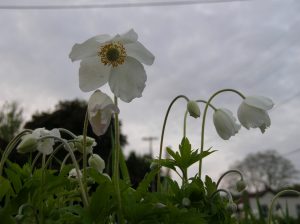 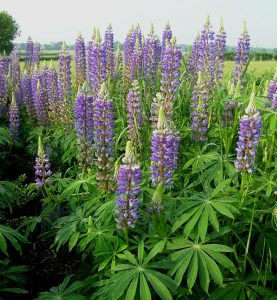